The Four Horsemen of the Apocalypse 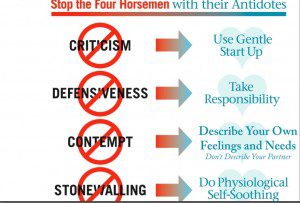 Are all negative things equally corrosive in relationships? In his research, John Gottman identified four ways of interacting that are the best predictors of divorce. John Gottman calls them the Four Horsemen of the Apocalypse. Like the the Four Horsemen of the Book of Revelation, which wreak havoc and destruction on the face of the Earth, these four horsemen wreak havoc and destruction on relationships:

Criticism
Criticism is describing a problem as a flaw in your partner’s character, for example, “You are so lazy.” Criticism often begins with “You always” or “You never” and involves pointing the finger at your partner and implying that there is something wrong with your partner’s personality.

Defensiveness
Defensiveness is an attempt to protect oneself, to defend one’s innocence, to ward off a perceived attack. This is usually done by counter-attacking or by whining (innocent victim stance). The antidote to defensiveness is to accept responsibility for at least a small part of the problem.

Contempt
To be contemptuous is to put someone down, to take a higher plane – for instance, taking a higher moral ground. Contempt is any critical statement you make when you feel superior to your partner. It’s a position of “I’m better/smarter/kinder/etc. than you are.” It may be accompanied by belligerence. There is a mindset which underlies contempt: it is a negative habit of mind where the person scans the environment for people’s mistakes rather than what is positive or what to appreciate.

There is a cross-culturally universal facial expression of contempt: a lateral pull of the left-lip corner to the side by a muscle called the buccinator, creating a dimple.

Contempt is the most damaging of the Four Horsemen, so much so that John Gottman calls it “sulphuric acid for a relationship.” A husband’s contempt predicts a wife’s number of infectious illnesses in the next four years. Contempt is our single best predictor of divorce in heterosexual couples or break up in same sex couples. The antidote to contempt is to describe your own feelings and needs, not your partner.

To stonewall means that the listener withdraws from the interaction while staying in the room. Basically, this means not giving cues that he or she is listening, for instance, by looking to the side, not maintaining eye contact, or crossing one’s arms, etc. Men tend to stonewall more than women. Usually, partners stonewall because they are physiologically flooded. Therefore, the antidote to stonewalling is self-soothing and staying connected in the interaction.

While the presence of any one of the Horsemen is not necessarily an indicator that the marriage is headed down what John Gottman calls “the Distance and Isolation Cascade,” the presence of several or all Four Horsemen, particularly Contempt, blended with anger, is an indication that a marriage is in trouble.