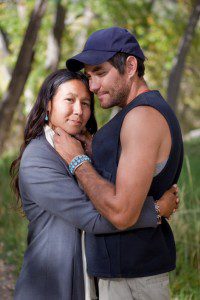 The White Mountain Apache Reservation is located in east-central Arizona, consisting of 1.67 million acres (over 2,600 square miles). There are approximately 15,000 tribal members living on and off the Reservation. The majority of the population lives in Whiteriver, the seat of the Tribal government. Culturally, there is a clan system and extended families are extremely important and tend to be matrilineal. Like in other parts of Native America, there are very high indices of poverty, unemployment, domestic violence, substance abuse (primarily alcohol), suicide attempts and completions, juvenile delinquency, and violent crime.

My Professional Experience With the White Mountain Apache Tribe

I have worked with and for the White Mountain Apache Tribe for the past five years: three in suicide prevention and intervention with Apache Behavioral Health Services, and almost two with Rainbow Treatment Center, where I coordinate family-centered substance abuse treatment programs. I came here shortly after earning my Masters of Science in Counseling in Marriage, Family, and Child Therapy and obtaining my associate license. I obtained my independent license here and earned my certification as a Certified Gottman Therapist here.

Gottman Method Couples Therapy is based on the 40 years of breakthrough research of John Gottman, Ph.D., on marriage and relationships with more than 3000 couples, including one group for more than 20 years. John Gottman’s research has focused on relationship stability and divorce communication and involved the study of emotions, physiology, and communication.

In the process, John Gottman observed what he came to call the Masters and Disasters of Relationship. He defines Masters of Relationship as two people who stay together, who report high relational satisfaction, and who like and enjoy one another. These relationships are suffused with a much higher percentage of positive interaction, even when discussing a conflict, than a couple in distress (Gottman & Schwartz Gottman, 2013, p. 2).

Through multi-dimensional, thorough, and extensive research, John Gottman was able to decipher what strengthens relationships; that is, what keeps a relationship stable and vibrant. He learned that couples who stay happily married have everyday interactions with one another that are very positive. Secondly, the couples who stay happily married are far less negative and more gentle in the ways they handle conflict. Through intervention studies, he learned that these were not only the effect of happy relationships, but also the causes (Gottman & Schwartz Gottman, 2013, p. 2).

The results of John Gottman’s studies form the basis of Gottman Method Couples Therapy and the workshops.

The basic assumptions of Gottman Method Couples Therapy are as follows:

Based on my experience, I think that Gottman Method Couples Therapy works well with White Mountain Apache clients because of the assumptions behind it, the metaphors used in Gottman Method Couples Therapy are easily accessible and have resonance, and the interventions respond to the particular relational needs and dynamics of White Mountain Apache couples.

First, in my experience, Gottman Method Couples Therapy fits well when working with White Mountain Apaches because of the assumptions above. The dyadic focus gives the clients the skills that they need to improve their friendship and intimacy and manage conflict on their own. Since most therapy here is very brief and the more concrete the better, the focus on skills and on the dyad is very instrumental. The assumption of state-dependent learning is also very helpful since, in my experience, many of my clients have poor emotion regulation skills. Allowing them to experience emotional states in session and teaching them how to cope with and change them at the same time, helps them to better access their learning while under stress outside the therapeutic context. Helping partners to self-soothe and to soothe one another is critical, since flooding and diffuse physiological arousal (DPA) are very common, in my experience.

The assumptions that the interventions should be easy to do and that marital therapy should primarily be a positive affective experience are equally important because, in my experience, many clients are afraid of and reluctant to participate in marital or couples therapy. In order for them to stay engaged in and benefit from marital therapy, the interventions need to relatively easy and the affective experience positive. Finally, the goal of fostering a “good enough marriage” is a worthwhile and achievable goal. Expecting a “perfect” marriage would be unrealistic and, very possibly, harmful.

Second, in my experience, the metaphors of Gottman Method Couples Therapy, particularly the Sound Relationship House and the Four Horsemen of the Apocalypse (I.e. Criticism, Defensiveness, Contempt, and Stonewalling) are easily accessible to and resonate with my White Mountain Apache clients. Everyone understands about building a solid house. My clients easily grasp the Four Horsemen and become quite adept at identifying when they are occurring.

Third, the interventions of Gottman Method Couples Therapy are very helpful for my White Mountain Apache clients, particularly the Gottman Love Map Exercise, the Aftermath of a Fight Questionnaire, teaching Softened Startup, Self-Soothing, and the Dreams Within Conflict Intervention.

Many of the couples that I see had a very brief courtship period before “getting together” and that period was often dominated by the mutual abuse of alcohol. As a result, they did not build Love Maps (I.e. a cognitive map of their partner’s inner psychological world, his or her worries, stresses, joys, and dreams). However, if there is just a speck of fondness and admiration between them, Love Maps can still be built. The Love Map Cards provide couples with a structured and enjoyable format for building Love Maps. We have used the Love Map Cards at the annual couples retreat, in the couples day treatment cycle, and in the multi-couple treatment program and it has been a pleasure to see how much our couples enjoy the exercise.

The Aftermath of a Fight or Regrettable Incident Questionnaire is probably the intervention that I have used most with couples. The purpose of the Aftermath of a Fight Intervention is to help couples process their last fight without entering back into the fight. The couple that I worked the longest with worked primarily on this skill. When they completed therapy, they told me: “We still fight, but not like we used to and we come back together sooner and process the fight on our own.” This is a couple that used to stonewall each other and go their separate ways for days; now they process their fights the same day, usually within a matter of an hour or two. That, in my book, is progress and, for them, is a “good enough marriage.”

Teaching softened startup is critical for my clients. Startup, the way a topic of disagreement is broached, is critically important in predicting marital outcomes. How a conflict discussion begins usually determines how it ends. If it starts harshly, it will end harshly. If it starts softly, it is more likely to end better. Harsh startup by the female partner is associated with relational or marital instability and divorce or separation (Gottman, 1999, p. 41). Women are consistently more likely to initiate conflict discussions and to use harsh startup. In my experience, startup in the couples that I have worked with is very harsh, so teaching couples how to initiate conflict discussions with softened startup is very helpful and effective for them in terms of managing conflict.

Teaching clients to soothe themselves and their partner is equally important. I have observed that when emotions and conflict are involved, my clients become quickly flooded and experience diffuse physiological arousal (DPA), which is to say that the body’s general alarm mechanism is activated and individuals experience physiological changes which make it harder to problem solve. Individuals in DPA only hear and see signals of danger; nothing else. They are more likely to attack or be defensive verbally. Empathy and creative thinking fly out the window; along with positive communications skills (Gottman & Schwartz Gottman, 2013, p. 37). With my clients, this usually results in domestic violence, a drinking binge, and/or a partner leaving for days or weeks. Therefore, it is important to teach couples to recognize when they are getting flooded and how to take a break and soothe themselves. A pulse rate above 95 beats per minute is a good indicator that someone is flooded. I once had a client that got up to 140 bpm in session. After doing a relaxation exercise with him, his pulse rate was 55, below the average rate of 60. He now uses the relaxation exercise to soothe himself when he is becoming flooded.

Finally, the Dreams Within Conflict Intervention is most useful in helping couples move from gridlock to dialogue on perpetual issues. The idea behind the intervention is that most gridlocked, perpetual conflict results from life dreams in conflict and the goal is to help couples dialogue about the conflict without getting back into gridlock. I have found that once couples understand the life dreams behind their partner’s position, there is a great softening that occurs. For example, I worked with one couple that, whenever they would argue, he would try to leave and she would try to retain him, and that is where the domestic violence would often begin. He grew up in a home where he witnessed his father brutally beat his mother and swore that he would not be like his father. Therefore, when he and his wife start to fight, he immediately starts to leave to avoid violence. She grew up in a home where her father abandoned her and her mother frequently and, eventually, all together, so she would try to retain her husband because his wanting to leave triggered her abandonment issues. Once they understood each other’s experience, they were able to soften their approach to each other in conflict and to take a negotiated time out instead of one wanting to leave and the other trying to retain the other.

One Caveat: The Uninvited-Invited Guest

There is one caveat or reservation to the effectiveness of Gottman Method Couples Therapy with a Native American population: the uninvited-invited guest of substance abuse (a concept that I will explore in a future essay). Any couples therapy approach with a Native American population has to take in account and address the high rates of substance abuse and the high correlation between substance abuse and intimate partner conflict on most reservations. In truth, most of our couples do okay as long as they are sober, but intimate partner violence on the Reservation almost always occurs in the context of substance abuse. I once asked our first responders what percentage of domestic violence calls involved substance abuse. Unofficially, they told me that substance use is involved in 90 to 95 percent of the domestic violence calls that they receive.

When people are intoxicated or under the influence of a substance, they cannot use the conflict management skills that they learn in Gottman Method Couples Therapy. Sobriety is a pre-condition for the effectiveness of Gottman Method Couples Therapy. However, I believe that sobriety and the relationship can be worked on simultaneously and that the triggers and skills (I.e. stress reduction, managing conflict, creating a sober-supportive environment, etc.) for both overlap.